The new chicks are here! 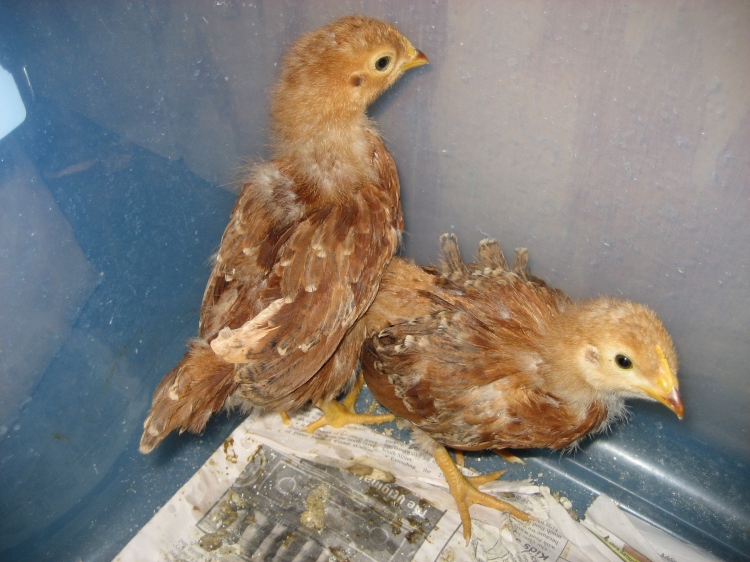 We returned from a week at the beach to find that our rooster had started crowing. Or rather, our rooster had  been taught to crow by one of the men painting our house. This being a small town, the crowing coach is also the uncle of two of the girls’ best friends, and he lives on 25 acres of land with assorted free-range poultry. So I operated on the age-old rule: You teach my rooster to crow, it’s yours. Off went our rooster to the country — although the beautiful thing is that, in this case, that’s NOT a euphemism for putting an animal down: the country really IS the country, and it’s just  down the road.

Finding a good home for our rooster neatly coincided with a friend offering us some extra chicks. So, on Campbell’s birthday, we picked up two Rhode Island Red chicks. The girls used this as an excuse to shuffle around the names of our chickens; we now have two white Leghorn hens named Daisy Flower and Sunny, and two brown chicks named Scaredy-cat Simba and Grace. We’re fairly sure that they’re all hens.

The new chicks are really, really cute, so they’ve been girl-handled quite a bit. I’m hoping that’ll make them a little more cuddly than the Leghorns, who are still pretty flighty.

We’ve got a new venue!

Starting tomorrow, I’m going to have a regular, bi-weekly column in the online edition of our local paper, The Addison Independent! I’ll be writing about life in central Vermont from the perspective of a mother of young children who’s a recent transplant to the area — in other words, I’ll be doing pretty much what I do here, it’ll just be a little more Vermont-y. (Just like how, when I write over at On the Willows , it’s pretty much what I do here, just a little more God-y).

I don’t expect that this new gig will significantly change anything here at The Pickle Patch. In fact, I’ll likely be re-using some of my more Vermont-focused material for the Independent column. As I do with On the Willows, I’ll post a link on this site whenever I have an article over at the Independent.

The new chicks and new column are both very happy things. But for whatever reason, life usually doesn’t hand you pure, undiluted joy — at least, not for very long. I’m not quite sure why it seems to work this way — that, when you’re given something, something else is taken away — but in my experience it’s usually been a good thing. Helps keep you from getting too full of yourself, if nothing else.

Which leads us to:

A tick made me sick (maybe)…

I’ve had to slow down quite a bit over the past couple of weeks, because I have not been entirely well. You may recall my mentioning the pain in my knee joints that started out of nowhere on our trip to Maine. You may even recall my joking that I assumed it was either Lyme disease or Lupus; if you expect the worst-case scenario, it can’t possibly be the worst-case scenario, right?

Turns out that’s not always true. The pain didn’t improve, I started feeling it down my arm and into my hand, and by the time we got home from Maine I was crushed by exhaustion. Not the normal, I-have-three-young-kids exhaustion, but an exhaustion so intense that by the end of the day I could barely lift my arms. All of which gave new meaning to the headaches and vague feeling of not-rightness I’d been having on an almost daily basis.

So, I went to my doctor, who took four vials of blood out of me and began treating me for Lyme disease. (In our area, if doctors even suspect Lyme, they go ahead and begin treating it with antibiotics, because the cost of NOT treating it quickly can be the onset of chronic Lyme). The conclusion? My bloodwork came back completely clean: negative for Lyme and all other suspects. Unfortunately, that doesn’t mean that it wasn’t Lyme, because the test for Lyme is notorious for giving false negatives. Whatever the ultimate culprit — and my doctor thinks it could be another tick-borne bacteria that isn’t picked up by the Lyme test — the GREAT news is that I’m starting to feel better. A few days after beginning antibiotics, my energy returned to its normal level of exhaustion. The joint pain seems to be taking a little longer, but I’ve started to have some good days in that regard. (And honestly, I’ll take a little joint pain over the fog of exhaustion).

There are, of course, other changes brewing around here: summer is on its downslope into fall, Fiona and Campbell will start preschool in a few weeks, Erick will go back to teaching next month. And change, as we all know, can be difficult and disorienting. But this go-around, I’m trying to handle all these changes like a rooster.

Yes, like a rooster. The aforementioned rooster, who started crowing and had to be sent away, showed me how to deal gracefully with change. 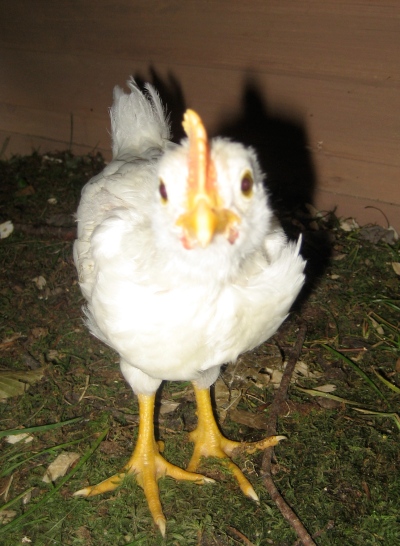 The best way to transport a mature rooster is in a burlap sack. The rooster has to be enclosed, or else they’ll flap and fly all over your car. But a cage isn’t a good option, because they might bang around and damage their comb. So, when it came time to bid our rooster adios, we caught him, put him in a burlap sack, and tied the neck of the sack with twine.

I expected drama. I expected squawking and flapping and fighting and feathers flying. But instead, our rooster, who up to this point has spent his days posturing and crowing and bossing the hens around, got very still and quiet as soon as we placed him in that burlap sack. No noise, no movement; we could have been lugging around a bowling ball.

The rooster was nervous, of course — probably even terrified. But I think that this is how I’d like to handle change when it comes in my life: not by squawking or fighting, but by getting still and quiet. Change is like being shoved in a burlap sack and driven to an unknown destination; you’re never quite sure if you’ll be dropped off at the Purdue slaughtering plant or 25 acres of bucolic free-range countryside. But fighting this change is pointless, and it just makes the ride unpleasant. I’d rather be still and quiet, like a rooster.

© FAITH GONG and THE PICKLE PATCH, 2011-2019. Unauthorized use and/or duplication of this material without express and written permission from the author is strictly prohibited. Excerpts and links may be used, provided that full and clear credit is given to FAITH GONG and THE PICKLE PATCH with appropriate and specific direction to the original content.
%d bloggers like this: