We have now been residents of Middlebury, Vermont for almost 3 very happy weeks.  We’ve all loved settling in to our new house and exploring the area, and the girls could not have had an easier transition. Herewith, five lessons from our first month as Vermonters:

During our first couple of weeks here, it was necessary to have assorted contractors in and out of the house. It was almost impossible to end one of these visits without having become acquainted with the life history of the plumber, painter, glassman, etc. Perhaps most eye opening was the realization, while conversing with Bronwyn the decorator during one of our recurrent visits to Countryside Paints, that the contractors had all been talking about us! So, in a relatively brief period of time, we’ve apparently acquired a reputation as “The Gongs who need some work done on their house.” I guess there are worse reputations to have, and I hope we can avoid them!

As many of you know, I wasn’t sure how we’d cope with the complete absence of any of the chain stores (i.e. Target) upon which I’d come to rely during my time in urban areas. We are coping quite well, and have logged in some productive visits to the town’s enormous Hannaford’s grocery store, a couple of lovely hardware/paint stores, the dollar store, and an amazing Ben Franklin’s (basically an old-style 5-and-dime). But last weekend we did take a trip up to Burlington (the “big city” in Vermont, pop. 42,000) to visit a mini-mall that boasts Wal-Mart, Bed Bath & Beyond, and Home Depot, among other things. It was an hour drive each way, through the most amazingly pastoral farmland you could imagine. And we were almost giddy to see so many stores in one place that we used to take for granted. We were also happy to head back home. I think we’ll try to make a monthly pilgrimage to Burlington, but it’s nice to live elsewhere.

One nice side of small town life is the friendliness. Within days of our moving in, many of our neighbors had dropped by to introduce themselves. I’m already seeing the same families at the library and around town. Whenever we go to Sama’s Deli for lunch or ice cream, we ALWAYS run into one of Erick’s new colleagues. And on Father’s Day when we took Erick to breakfast at the local diner, we found ourselves seated in between both sets of our next-door neighbors.

2. We live in the woods. For some reason, perhaps because we were house hunting in early April before there were many leaves on the trees, we didn’t realize the degree to which our house is located in the woods. I don’t mean that there are some trees in the yard; I mean that we’re actually located within the administrative boundaries of the Green Mountain National Forest. (Apparently that means that the government can decide to buy the land back if it wishes, so please keep it quiet!). If you look at a satellite photo of Middlebury, there is our street and then there is the vast green swath of forest that sweeps up the Green Mountains. We are pretty much the end of the line out here. And it’s absolutely beautiful. Here’s the daily drive home:

And here’s our backyard:

Notice the little shed, which is meant to be used for useful storage but of course has been claimed by the Gong Girls as a play house.

So far, our little Bay Area girls have been intrepid explorers of the forest. 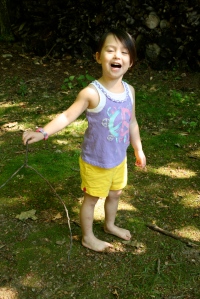 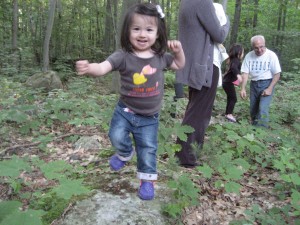 They’ve already seen so many chipmunks that they’re not even excited by the sight anymore, and they caught a toad in our driveway.

But there are some drawbacks to life in the woods. Build a house in the woods, and pretty quickly the woods will start demanding to be let back in. Our yard is filled with hundreds of little saplings that need to be pulled whenever I go outside so that they don’t turn into large trees someday soon and overtake our residence. And we’ve had to come to grips with the fact that pest control will be a regular part of our lives. Everyone has numerous mosquito bites. We have wasps’ nests.

We have ants. Now, those of you who live in California are used to small ants that travel in armies and march endlessly across a surface. These ants always caused me a great deal of panic, because it seemed like they’d never STOP. Well, Vermont ants are a different breed altogether. They travel alone. They are slow. And they are HUGE. Here’s a sample: 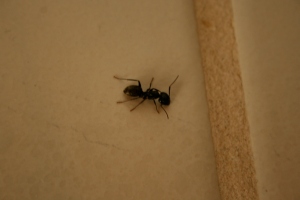 I’m sure there’s some sort of metaphor there about the difference between the East and West Coasts, but I’m not sure what it is.

And, yes folks, looks like we’ll have to deal with my favorite pest of all. But as Erick says, “Mice aren’t pests when you live in the woods.”

3. Owning a house is a LOT of work. This is one of those things that we knew intellectually, but just like “Having kids will make you tired,” you don’t REALLY understand it until you’re living it. I would say that this house is roughly equivalent to having a fourth kid, except that kids occasionally repay your efforts with hugs and smiles. We are essentially first-time homeowners; our only previous experience with ownership involved a 1-bedroom Manhattan apartment on the 28th floor of a building with a full maintenance staff. That just doesn’t count. We now have a 4-bedroom house, complete with a yard. It’s the perfect house for our family and we love it, but it’s kind of kicking our butts. It was by no means a fixer-upper, but we have learned that even a non-fixer-upper will need continual fixing up. Never in my life did I think we’d be up on ladders painting our kids’ room “potpourri green,” but that is exactly what we did one week ago. (And we liked it! We’re painting another room this weekend).

Because we live outside of town, we have our own well for water and our own septic tank. We now have to think about things like replacing the roof, staining the deck, and spraying annually for carpenter ants. Thankfully Erick, the logical economist who places a high value on “utility costs,” is fixing us up with technological tools (like Toodledo, our new way of managing the to-do list) in order to organize our new life. He does this when he should be mowing the lawn, but I’m sure we’ll be more efficient for his efforts in the long run!

4. Vermont is a lovely place to live. I’m sure reality will kick in at some point, but right now it feels like we’re living in some sort of extended camp vacation. The beauty of this place, the slower pace of life (we’ve noticed that there’s NEVER a traffic report on Vermont Public Radio, because there’s simply no traffic here!), and the overabundance of year-round outdoor recreation all contribute to the sense of holiday. And in so many ways, it’s as if someone designed Vermont to be as absolutely family-friendly as possible. Just about any restaurant or store seems to have a basket of toys and books handy. And when we visited the town courthouse to get our drivers’ licenses at the mobile DMV station, we were greeted by security guards who gave the girls pencils, stickers, and coloring books and then directed us to the TOY ROOM across the hall (and after all that, it only took Erick and me 20 minutes to obtain our licenses)!

One of the highlights of the past week was our first visit to Lake Dunmore. This is a pristine lake about 20 minutes from our house, surrounded by quaint cottages and campsites. At one end is a public park complete with a lawn, beach, and playground. The girls splashed to their hearts’ content, and then we had a picnic dinner on the lawn, followed by ice creams at the Kampersville Deli on the way home. It doesn’t get much better than that. 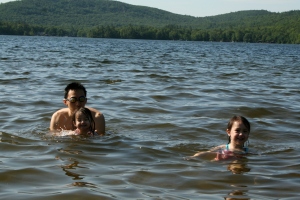 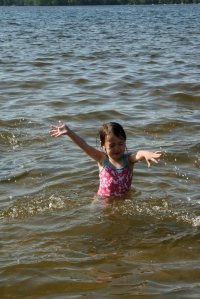 5. We love our family and friends.It was a huge logistical endeavor to move the 5 of us across the country. We could not have done it without the love, support, and prayers of numerous family and friends. Tommy & Celeste Stinson were up way too late with us the night before the movers came helping to disassemble furniture. Several gracious friends dropped by meals at just the right times. Erick’s parents hosted us in their house for 10 days while all of our things traveled cross-country. Aaron & Jessie Beck opened their house to us and enabled us to get our East Coast Minivan (now named “Greenie” by the girls, because it is – you guessed it – green). And then there was our East Coast move-in crew, without whom we’d still be living out of boxes!

Finally, we feel so grateful for our three girls, who treated this massive life change with an incredible sense of fun and adventure. They amused themselves while their parents were stressed out and distracted by the logistics of the move, they behaved well on a cross-country flight, and they consented to sleep just about anywhere (including all together on an air mattress on the floor) until we could provide them with actual beds and mattresses. Perhaps most of all, our sweet little Georgia, who had the dubious distinction of being born 3 months ago, just when all of these changes were taking place, has been an amazing trooper. She’s grown so much since we got here, and now wants to stand up (holding our hands, of course) more than sit. Much to everyone’s delight, she’s now busting out huge smiles and laughs, and is in serious danger of being spoiled by her sisters.

We are so grateful to all of you!! Tune in for future (and likely, shorter) updates.

2 thoughts on “Little Pickles in the Big Woods”