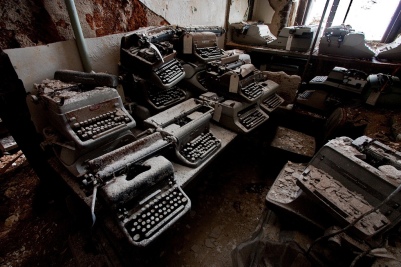 Last Sunday afternoon, a friend invited me to accompany her to a screening of Doug Nichol’s new documentary film, “California Typewriter,” at Middlebury’s Town Hall Theater.

Sunday afternoons are usually times I set aside to write this column, but the opportunity to go with an (adult!) friend to watch a film (for adults!) was too good to pass up.

As you may have guessed, I don’t get out much. The last film I saw in a theater was the animated Disney feature, “Moana,” watched a year ago in the company of my children. So you may take my film criticism with a grain of salt, but I’d encourage anyone who’s able to see “California Typewriter” to do so. It’s a beautifully made and thought provoking documentary — an excellent way to spend two winter hours.

“California Typewriter” is a love song to typewriters, specifically the manual typewriter. Its praises are sung by voices including actor Tom Hanks, musician John Mayer, historian David McCullough, and playwright Sam Shepard. The film’s title is taken from the name of a family-run typewriter store in Berkeley, California — one of the last standing typewriter repair shops in America. And the tension that the film explores is: Will the peculiar retro charm of the typewriter enable it to endure (and California Typewriter to remain in business) in our fast-paced digital culture?