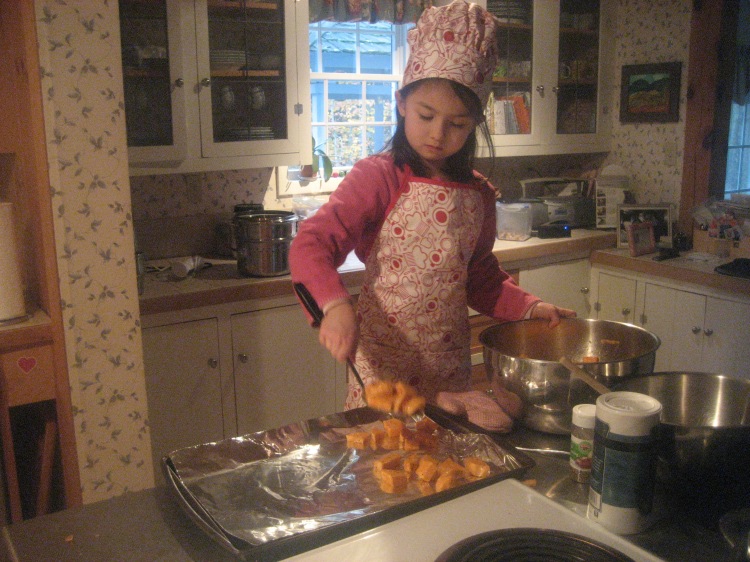 Life has been busy here.

Life is always busy, of course, but the past few months of our family’s existence have felt like a three-ring circus: preparing for our semester-long sabbatical in California, planning the renovations that will happen in our new house while we’re away, and readying our current house for sale (also while we’re away.)

Then, this week, our 4-year-old daughter caught pneumonia when the cough-and-congestion bug making its way through our entire family decided to park in her lungs.

She’s fine now — the worst part of the whole ordeal has been convincing her to take 9 mL of amoxicillin three times a day — but there were two days during which I was mostly housebound, save for a couple of trips to shuttle other daughters to their activities.

On the afternoon of the day her fever broke, my girl and I walked down to the end of the driveway to meet her sisters’ school bus.

“Look!” I said to her as we stood there, blinking in the strange sunlight, “Almost all of the leaves are off of the trees now. The branches are all bare. Winter’s really coming.”

This should not have surprised me. For one thing, we’ve enjoyed an autumn that an octogenarian friend informs me has encompassed one of the loveliest and longest foliage seasons in her memory; we are overdue for those leaves to hit the ground. And for another thing, earlier in the week I had spent upwards of an hour sweeping piles of dried leaves off of our deck.

But my nose had been so buried in my earthbound tasks that I hadn’t taken the time to scan the skies; I hadn’t noticed that the season was really and truly changing.

Something similar has been happening with my children.

This past weekend I arrived home from a full morning out (shuttling a daughter to activities, meeting with a Middlebury College student) in order to prepare for company that afternoon, only to find that our house, by no means perfectly tidy when I’d left it, looked as if it had been torn apart by hooligans. Because it had, and the hooligans were three of my daughters.

My first response was to get angry with my husband, who’d gone outside to blow leaves off of the lawn (those leaves again!), leaving three young children — including our terrible 2-year-old — unattended in the house, and then neglected to have them pick up the resulting, inevitable mess.

Then I realized that, as valid as that anger may be, my husband was not solely responsible for the situation. The terrible 2-year-old has almost no impulse control, but my other children are old enough to know that they need to clean up after themselves.  Next week, my oldest daughter will celebrate her eighth birthday; that is more than old enough to take responsibility for household tasks.

My children were growing up, and I’d been missing it. The season was changing and I hadn’t noticed; I hadn’t scanned the skies.

So part of the fault for the situation in which I found myself, having to spend 45 minutes cleaning the house for our guests (not making it perfect, mind you, just making it somewhat welcoming) — part of that fault lay with me.

Children rarely take responsibility for themselves, for their possessions, for household tasks, unless they are given that responsibility. And I had clearly been lax in equipping my children with responsibility.

I had been lax because I had been dealing only with what was right under my nose: the logistics of a year involving three houses and three moves, shuttling daughters around to activities, trying to keep the 2-year-old from playing in raw sewage. Those are important things, but I’d neglected the big picture: I didn’t have a plan for my children growing up.

And more important than a plan — Because who really has a plan for parenting that doesn’t get chewed up and spit out by our offspring? — I hadn’t made time for my children growing up.

But the season is changing. If I sent my daughters outside in tank tops and flip flops in December, people would consider me an irresponsible parent. How much more so if I unleashed children upon the world who wouldn’t clean up after themselves?

So we sat the girls down, and we had a talk that went something like this:

“You know how we always try to be on time, because if we’re late we’re showing that we’re inconsiderate of other people’s time? Well, cleaning up is like that, too: If you don’t clean up after yourself, if you just leave your mess laying around, then you’re showing that you’re inconsiderate of other people’s time. Because if you don’t clean up your own mess, then somebody else has to — somebody who didn’t make it in the first place. Back when you were much younger, Daddy and I would clean up your messes because that was our job. But just like it’s not our job to change your diapers anymore, it’s not our job to clean up your messes anymore.

“So from now on, when you take something out to play with, you need to put it away when you’re finished playing with it, and we shouldn’t have to remind you of that. If you want to come back to it later, put a little note on it that says ‘Save.’ Otherwise we’re going to assume it’s trash, and that’s where it will end up.”

These course corrections in parenting can feel like turning a cruise ship around, but they’re well worth the effort. When I take the time to scan the skies, I find so many areas in which I can start training my girls in responsibilities commensurate with their growing maturity: they can cook, they can clean, they can help their younger sisters — they can even, with adult supervision, use knives and light fires in the wood stove.

And you know what? For the most part they relish taking on these responsibilities. They feel proud of themselves. So do I.