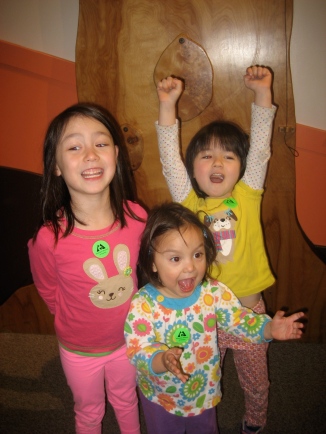 Last spring, I was doing what I used to do before our town entered the 21st century and instituted online registration for recreation programs: standing in a serpentine line outside the town gym, waiting 30 minutes for the doors to open upon gymnastics registration. In retrospect, I look back fondly on the hours I spent in those lines; they were great chances to catch up with friends and to make new acquaintances. In this case, I was chatting with a friend, who then introduced me to a new acquaintance: a woman with four sons.

“Wow,” I said, “four SONS! I don’t know anything about sons, but I hear they’re harder to raise than daughters.”

“Well, sons are very energetic, very physical,” she said, “but I personally would find daughters much harder –“

At just this moment, all three of my girls (Abigail still being in utero) came shrieking down the hall, doing their  best impersonation of an air raid siren.

“– for that very reason,” my new acquaintance continued. “The noise would drive me crazy.”

Now, I don’t put much stock in gender stereotypes. What I said to that woman is true: I don’t know ANYTHING about sons. My information about young boys comes mostly from observing my daughters at play with their male friends — and from what I can tell, my girls run circles around these boys. So I can’t say with any authority that boys are harder, or more energetic, or quieter than girls.

Here’s what I can say with authority: MY GIRLS ARE LOUD.

They scream. They scream with joy while playing, they scream at each other (and us)  in anger, they scream for no apparent reason — just for fun. And when they’re not screaming, they’re talking. They talk all the time, about everything. Also, because there are four of them, they’ve learned that they need to talk loudly.

Mealtimes at our house are probably just as you’d imagine: Four girls verbally elbowing each other to get a work in edgewise (even though Abigail isn’t using words yet, she still adds noise), ratcheting up the volume to make themselves heard above their sisters — and above their parents’ increasingly loud pleas to stop interrupting and take turns.

The problem is, even when they’re not jockeying to be heard, they’re still loud. It’s as if, due to the constant noise in our house, they’ve lost all sense of what a normal “indoor voice” is. So whether in a restaurant, a store, the library, or on the phone to their grandparents, my girls continue to shout. More than once I’ve said, “Please, you don’t need to shout,” only to have the daughter in question look at me with confusion and shout, “I’m not shouting!” During our conference with Campbell’s preschool teachers last year, her teachers reported — with disbelief bordering on concern — that Campbell had told the class that her house was “really quiet.” Campbell knows what “quiet” means, she’s just deluded about what it actually is.

I’m sure that most people in our town can hear us coming long before they can see us.

And that’s just when they’re being well-behaved. Then there are the fights. It may be that boys fight by beating each other to a pulp; my girls beat each other to a pulp while screaming at the top of their lungs. Kicking, biting, scratching, hitting, all accompanied by, “MOMMY! She’s not SHARING!” (The item not being shared is usually an equine-shaped piece of plastic from My Little Pony: Friendship is Magic. I’ll say it’s magic; ah, the irony!)

Even when they’re supposed to be quiet, the noise doesn’t stop. Since they all share a room, bedtime sounds like a college party in full swing until all goes abruptly quiet when they pass out from exhaustion (we’ve decided not to intervene as long as they stay behind closed doors).

Even when they’re alone, the noise doesn’t stop. There are moments during the week, when the older two girls are in school and Abigail is napping, that Georgia is all alone. Does she sit and play quietly? No. Instead, Georgia has taken to narrating her life. For instance, Georgia will say, “She takes out a book and sits on the couch. She looks at the book,” as she does just that. Yes, she refers to herself in the third person, like she’s providing the voiceover for an Animal Kingdom segment on herself. I’m not sure whether to be concerned, or to steer her towards a future career in reality T.V.

Even when they’re quiet, the noise doesn’t stop. Usually they’ll stop talking after a while in the car (especially on these cold, grey winter days when the heat is turned up), but they always want to listen to music. These days, their music of choice is the soundtrack to the Broadway production of Annie. At first, I welcomed this as a relief from the Disney Princess CD that we’d played on repeat for years, but I’d never realized how much of Annie consists of prepubescent girls shrieking songs at the top of their lungs. At least, those are the only songs we listen to — we’ve never listened to the entire show all the way through, because my daughters insist on “‘Tomorrow,'” and…”‘Tomorrow,’ again!” until I’m about to lose my mind. It’s only a day A-WAY! PLEASE, make it STOP!!!!

For all these reasons, we’re not big on toys that make noise. But sometimes they’re impossible to avoid, like when they’re given as gifts. Last Sunday, one of my daughters unearthed a little fuzzy duckling that says, “QUACK QUACK QUACK QUACK!” when you squeeze its belly — a gift to one of the girls when she was a newborn. Somehow, this duckling made it out of the house, into the car, and into church, where the girls sit with us for the first part of the service. Of course, right in the middle of the offertory prayer, the duckling got squeezed. QUACK QUACK QUACK QUACK!

But I’m told that we’ll miss the noise when the girls are grown and gone. I’m told by no less a parenting authority than Brad Pitt, who said in a May 21 interview to People magazine:

As I write this, with all my girls at school or napping and my ears still ringing from the noise of an hour ago, I think: Spoken like a person who gets to spend lots of days reading the paper in hotel rooms, Mr. Pitt.

But I’m sure he’s right, and so when the ringing in my ears subsides just in time for the girls to wake up again, I’ll try to enjoy the noise while it lasts.

2 thoughts on “Bring in the Noise”