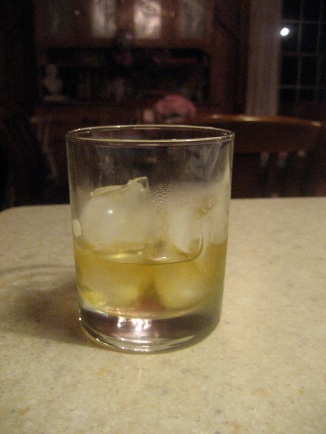 Almost immediately after I turned 21, I started on a quest to find “my drink.” It seemed like an important part of being a legally-allowed-to-imbibe adult. I wanted to have my own signature drink, a reliable cocktail that I could order whenever I went to a bar.

College, where I turned 21, was all about beer — mostly the beer-flavored drink known as Rolling Rock. But I’ve never been much of a beer drinker, never loved the taste.

During January of my senior year of college, I took a wine tasting class that a local restaurant offered to over-21 students. It was fun, informative, and gave me a good idea of what it looks like to know about wine. But wine is about as lost on me as beer; I’ll drink it with dinner if everyone else is, or to appear sophisticated, but to this day I can’t appreciate the various bouquets and flavors and finishes. White wine tends to give me headaches, red wine tends to give me stomachaches, that’s all I know.

That final year of college, my roommate promised to sell me on the virtues of the “Fuzzy Navel,” a drink she claimed to have perfected. For those who aren’t in the know, a “Fuzzy Navel” is made by mixing peach schnapps with orange juice. It’s delicious in a light, fruity way. One of those dangerous, “You can’t even taste the alcohol” kind of drinks.

But, I’m sorry, you can’t possibly continue to order “Fuzzy Navels” when you move to New York City for your grown-up, post-college career life.

During my early days in New York, I tried what other people were having to see if anything stuck. This was the heyday of “Sex and the City,” so I ordered my share of Cosmopolitans (vodka, triple sec, cranberry & lime juices). Not bad, but the thing about Cosmos is that they’re just a slightly more grown-up version of the “Fuzzy Navel:” light and fruity and frilly. Also, in New York City, Cosmos typically cost a lot of money for very little actual drink. And the biggest problem: everyone else was ordering them, so they weren’t really “MY drink.”

Then I started dating Erick, and for a while I had what he had: orange Stoli and tonic. Meh.

Towards the end of our time in New York, Erick and I (now married) had some friends over for a party. One of these friends — a big, boisterous Australian — handed me a drink and said, “You should try this.” It was a Scotch on the rocks.

I don’t remember what kind of Scotch it was, but it was a revelation. Something in me went BAM! THIS is my drink! It might have been generations of alcoholic Anglo-Saxon ancestors talking, but I listened.

Scotch continues to be my drink of choice. I consider it the perfect drink; a woodsy flavor that’s just the right amount of strong, a drink that can stand alone or go well with dinner. I’m far from a connoisseur, mostly because you really shouldn’t drink Scotch while pregnant, and I’ve been pregnant for the past six years. But I’m not anymore!

And that big, boisterous Australian who poured me my first Scotch? True story: He’s now the pastor of a church outside of Boston. One of the many reasons I love God.

NOTE: Please don’t read this as condoning alcohol abuse. Drink responsibly, everyone! Just saying that it’s nice to have a drink to call your own. Mine is Scotch, and I enjoy a glass of it every once in a while after the girls are all tucked in.