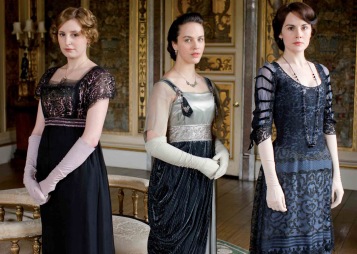 I’m not a trendy person; I tend to avoid anything that’s sweepingly popular. This is partly due to my contrarian temperament (I’ve loved the British alternative band Mumford & Sons for years, but when they won Album of the Year at this year’s Grammy Awards, I was actually upset. Now EVERYONE will like them, I thought). And it’s partly because I live in a small town with three young children (I saw NONE, exactly ZERO, of this year’s Oscar-nominated Best Picture films). I don’t usually read bestsellers until they’re off the lists because I’m cheap and have limited bookshelf space, so I get most of my books from the library. I don’t watch T.V. because we don’t have one.

I held out until three seasons of this hit BBC/PBS television series had passed, but it grabbed me with its manicured fingers in the end.

I first became aware of “Downton Abbey” through friends’ Facebook posts. During the first two seasons, the internet was ablaze with exclamations of shock, joy, or outrage, depending on what had happened on PBS the night before. Clearly this show was arousing passionate feelings in people I respected.

Then there was the dinner party I attended where the hostess turned to the table and said, “Okay, now can we talk about ‘Downton Abbey?'” I was the ONLY person present who wasn’t following the show. A friend at that same party told me that she’d be happy to lend me her DVDs of the series so that I could once again be a functioning member of society.

I took her up on it only after the Season 3 finale (which I have yet to see, so NO SPOILERS!). The morning after that episode, Facebook was on fire with fury, but nobody gave away exactly what had happened. I had to know! So I told my friend I’d take those DVDs after all.  (I’m starting the Season 3 DVDs now, although I’m a little concerned that watching the finale will put me into early labor….)

So, what’s the big deal about “Downton Abbey?” Here’s why I’m hooked:

-It’s relatable. Although it has a massive cast and a web of plotlines, “Downton Abbey” centers around the family of Lord and Lady Grantham, who live with their three daughters (and a dog) on a vast Yorkshire estate with dozens of servants, around the time of the First World War. In other words, if you took away the servants, cut down the estate to 1/10 its size, and set it in present day Vermont, you’d have our family.

-It’s honest. The moment that sealed my affection for “Downton Abbey” came towards the end of Season 1. Sarah O’Brien, who is Lady Grantham’s maid and as close to a scheming villain as you can get, is in the middle of doing something wicked and malicious when she pauses before a mirror. “Sarah O’Brien,” she says to her reflection,”this is not who you were meant to be.” (Or something along those lines, if memory serves). The awful thing happens anyway, and she spends all of Season 2 trying to make up for it. But this moment embodied what I think makes “Downton Abbey” great: It’s honest about people. There are no one-dimensional characters, nobody who’s all bad or all good. The people of “Downton Abbey” are complex: the worst of them have redeeming moments, and the best of them have shameful pasts or make horrible mistakes.

-Good parenting. Lord and Lady Grantham and their three grown daughters are members of the aristocracy during a time when British society is starting to shake up, to enter the modern era. It’s kind of like “Fiddler on the Roof” set in turn-of-the-century England. But what’s surprised me is the extent to which Lord and Lady Grantham are actually great parents; I even consider them role models for how to parent grown children. Instead of angrily clinging to tradition and insisting that their daughters operate within the bounds of aristocratic society, they’re usually able to affirm who their daughters are and to support what’s best for each of them. Which is not to say that they never lose their tempers or make mistakes, just like real parents have forever.

-It hooked my husband, too. Erick doesn’t like getting addicted to anything. So, while “Downton Abbey” is my excuse to sit my tired, pregnant body on the couch after the girls go to bed, Erick was originally happy to use that time to get his work done. But then he’d come downstairs to get a snack, and end up watching the show over my shoulder. First it was 5 minutes, then 10, then 30. By the end of Season 2, Erick sat down with me to watch the last few episodes in their entirety. Then he said, “You know, I really can’t stand the idea of you watching Season 3 without me.” So it’s become OUR show. And the other day, I got a letter in the mail: a very nice, handwritten letter. It was from my husband, who said he’d been inspired by “Downton Abbey” to sit down and write a letter with pen and paper.

If that’s not a good reason to love “Downton Abbey,” I bloody well don’t know what is.

One thought on “Downton and Out”