Yesterday afternoon, during nap time at our house, I decided to log in to my computer and check on the world before heading upstairs to wrap Christmas presents. Like so many of you, that’s when I was first confronted by news of the unimaginable tragedy at Sandy Hook Elementary School in Newtown, CT. For the next two hours, I sat glued to my computer screen, refreshing my Google news feed every few minutes. As if more FACTS could somehow help me make sense of this thing.

On the one hand, it feels like there’s nothing to say, especially when others are saying so much, so eloquently. On the other hand, it feels wrong to NOT say anything. So I’m going to re-post something I wrote back in April, in response to other unimaginable tragedies. I think it still stands; you can add Sandy Hook to the list of bad news, Adam Lanza to the list of bullies, and replace Easter with Christmas.

I find it hard to apply my own logic here to the Sandy Hook situation, but love IS hard. I post this to remind myself that, although it’s important to discuss things like gun laws and the mental health system, the root cause of senseless violence is US: broken people. And also to remind myself that love always, ALWAYS wins out over fear and hate in the very end.

I feel like there’s been a lot of bad news this year, and we’re only four months in. I suppose most years are like this, but we have such short-term memories that the world seems to be crashing down…again. (I think I have to stop blaming pregnancy hormones for my poor memory, since I’ve now been un-pregnant for over a year. SO I’m going to assume that everybody has no long-term memory, just like me).

Here’s a little run-down of some bad news that comes to mind: daily news of Syria’s violence against its own people; US Army Staff Sgt. Robert Bales is accused of massacring 17 innocent civilians in Afghanistan; unarmed 17-year-old Trayvon Martin is shot and killed amid unclear but disturbing circumstances in Florida; Mohamed Merah kills 7 people in France, including students at a Jewish school; Dharun Ravi is convicted of bias intimidation and invasion of privacy for using a webcam to spy on Tyler Clementi, his college roommate, who committed suicide after learning that Ravi had watched his romantic encounter with another man; the “Kony 2012” video goes viral with the story of LRA atrocities in Uganda; and in Oakland, CA (birthplace of all 3 Gong Girls) One Goh shoots and kills 7 students at Oikos University. And that’s just in the past month.

Even here in Vermont, where a typical police blotter item runs something like: “Woman called police to report hearing footsteps downstairs. Police arrived on the scene to find that her husband had returned home earlier than usual.” (I’m not kidding — that was an actual item), there’s been violent news. Melissa Jenkins, a popular science teacher in St. Johnsbury, answered a call for car help from a couple who used to plow her driveway; when she arrived on the scene, the couple attacked her in front of her 2-year-old son, killed her, and dumped her body in a shallow pond.

I hear these things, and my soul screams. Because EVERY DAY I tell my kids some version of: “You have to be kind to people. Especially people who are smaller or weaker than you — you have to look out for them, help them.” I’m pretty sure that most people tell their kids something like this; isn’t it the best way to function as a family? Isn’t it the best way to function as part of the HUMAN FAMILY? So, when do we start forgetting this? 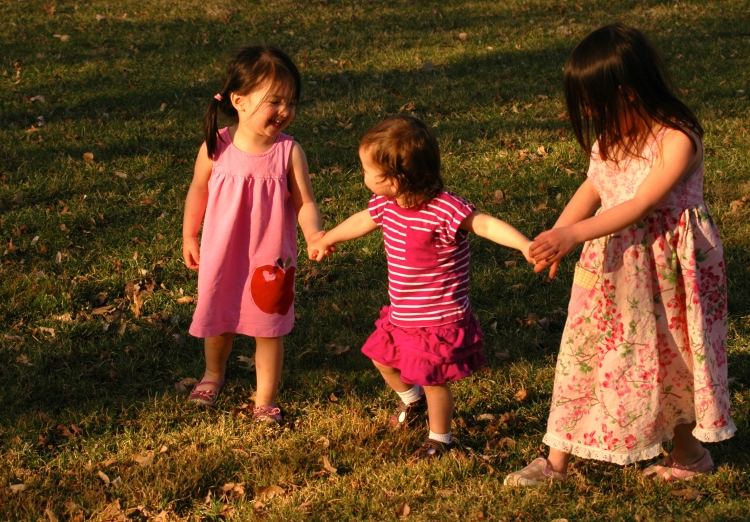 The answer, of course, is that we forget as soon as we hear it. The reason I keep reminding my kids to be kind to those smaller and weaker than themselves is because their default setting is to grab toys from their baby sister, or hit their other sister, or fight with their friends. Violent emotions begin at birth and are universal. Being kind is so easy to say, and so hard to do.

So how do we process the bad, soul-screaming news? The news that keeps us awake at night with questions of “What if?” and “How could they?”

I’m working out some answers after a little thing that happened to Fiona at preschool this month. One day, when I went to pick her up, Nick, one of her teachers, pulled me aside and said that a new boy at school — let’s call him Billy — who’d been having some “behavioral issues,” had gone up to Fiona during naptime and, completely unprovoked, hit her across the face. Fiona had apparently been “great about it” — she hadn’t cried or retaliated — but Nick wanted to let me know in case she mentioned it. 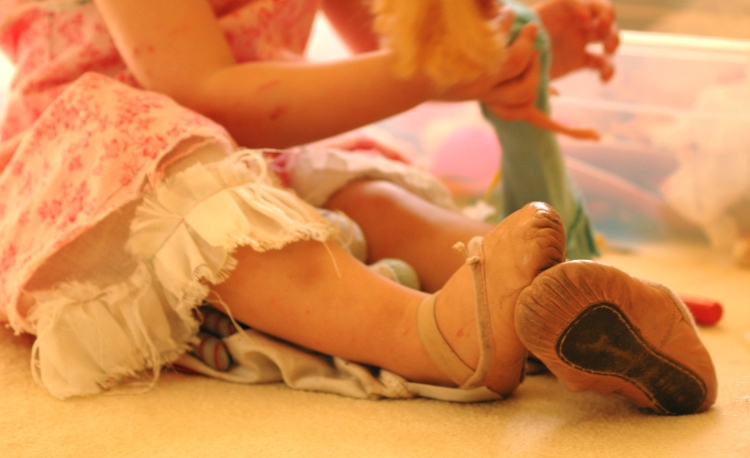 I don’t care if you’re Gandhi, if somebody hurts your kid your immediate gut instinct is to go after them with a tire iron. But I decided to put on my “grown-up face,” and on the drive home I casually said to Fiona, “Gee, honey, I’m sorry to hear that Billy hit you today.”

Now there’s a response to make your blood run cold; “It’s okay if he hits me,” is something that you NEVER want to hear coming out of your daughter’s mouth.

But, holding my grown-up face verrrry tightly in place, here’s what I said: “Actually, Fiona, it’s NOT okay if he hits you. NOBODY’S saying that’s okay. You shouldn’t EVER hit another person, and if you do then there has to be a consequence, just like there was for Billy today. So if he ever does that again, you need to tell a grown-up. But if he hit you like that for no reason, then he must be really mad or afraid about something, so I think the best thing for us to do is to be really kind to him, and to pray for him.”

Before you roll your eyes and click over to Facebook, let me remind you that I’m not some glassy-eyed, preternaturally wise and loving sitcom mom spouting cheesy cliches. I’m a real person, and if I occasionally fail to mention here all the times I lose patience with my kids or get angry with my husband or ignore my friends, it’s because I’m still vain enough to want you to like me. So I assure you that my little speech to Fiona came from somewhere outside of me (you can call it what you want; I call it God) and took every ounce of my emotional energy.

But after I said it, I realized that it was true. We did pray for Billy that night — just that whatever was making him afraid or mad enough to hit could get better. And all of this helped me to remember that Billy is four years old, and if you’re running around with “behavioral issues,” hitting other children at four years old, then something really is going on that is bigger than you. Something is making you so afraid or mad that you’re out of control. And it’s scary to be out of control; I see this with my own girls who, whenever they throw a massive screaming fit, just want to curl up in my lap and tell me they love me for the rest of the day, because they’re terrified of themselves.

And this made me think about Joseph Kony, and Dahrun Ravi, and Robert Bales, and George Zimmerman, and Mohamed Merah, and One Goh, and all the other bullies and criminals and dictators throughout history. Because once, they were four years old. Heck, once they were somebody’s tiny baby. And if, as they saying goes, we’re all the ages we’ve ever been, then inside each of them is a mad or scared little kid — and even deeper is the baby who blinked against the first light and held every possibility in its tiny fist. Inside every single person is a spark of humanity; sometimes it’s just buried underneath years of anger and fear. And those layers make it harder to access your humanity — to remember what your mother may have told you about being kind to those weaker than you — when, to quote St. Bono, you end up “stuck in a moment you can’t get out of.”

So, where does the prayer come in? I’m really, really hesitant to write about my faith, because it’s so easy to offend people, or be misinterpreted. And I’m not a religious scholar or expert. I’m just me, and I have some things that I believe are the truth, but I’ll also defend to the death your right to believe what you think is the truth. That said, here’s what I think is true:

I think, as I try to process somebody senselessly hitting my child, and all of the world news that’s essentially telling that same story, that I can and should get angry and demand justice, but I can’t stop there. Because if you stop and sit down in your anger and fear, then you just start to fester inside. Erick’s first reaction, when he heard about Billy hitting Fiona, was to teach her how to block hits and defend herself. That’s fine and useful, but it doesn’t begin to address healing her heart. The same applies to us when we demand arrests and reparations, and install alarm systems in our homes…and then stop.

I took a yoga class last week (!! the first actual, non-video yoga class I’ve taken in two years !!), and the instructor talked about “cultivating the opposite.” This means that, when something negative happens out in the world, we should cultivate the opposite response inside ourselves. That’s a little bit like what I’m advocating here. To respond with anger or fear to an act committed out of anger or fear solves nothing; it just makes us more angry and fearful. I think that, in order for true healing to occur, we need to acknowledge that every unkind act has two victims: the person being bullied, and the person doing the bullying. This requires that we recognize the spark of humanity — no matter how tiny — flickering in the perpetrator. 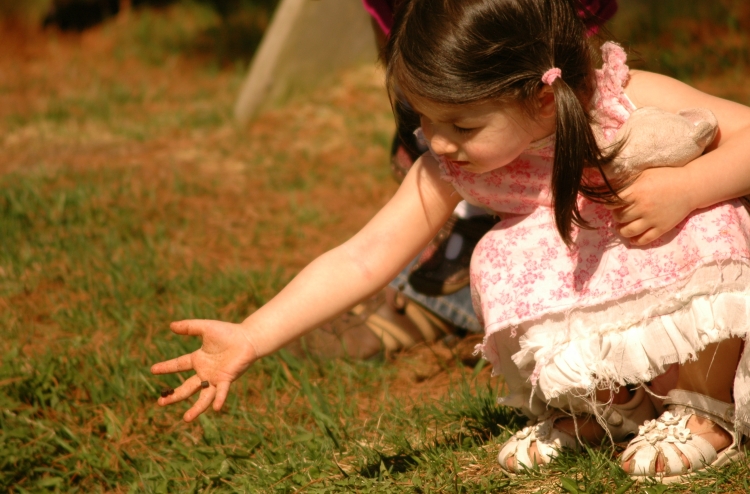 But that’s nearly impossible to do. The worst thing that’s happened to any of my kids so far is a smack at preschool; I can’t imagine if my child was one of the victims mentioned in this month’s news. I get angry enough just reading about these things; how do you recognize humanity in someone who kills your child? My yoga teacher seems like she’s probably a nicer person than I am, so maybe she can just will herself into “cultivating the opposite” — but I can’t. I need a yoga teacher to show me how to bend my body, and I need another kind of teacher to show me how to bend my soul in order to process life’s horrors. The kind of teacher who gets wrongly accused and sentenced to death, and while he’s slowly dying from torture looks down on the people mocking him and killing him and says, “Forgive them. They don’t know what they’re doing.”

So that’s why the prayer. And why I’m celebrating Easter this weekend. 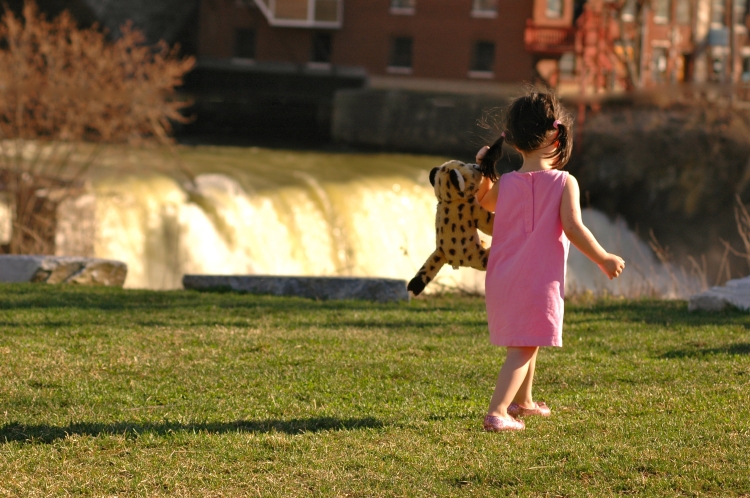 © FAITH GONG and THE PICKLE PATCH, 2011-2019. Unauthorized use and/or duplication of this material without express and written permission from the author is strictly prohibited. Excerpts and links may be used, provided that full and clear credit is given to FAITH GONG and THE PICKLE PATCH with appropriate and specific direction to the original content.
%d bloggers like this: