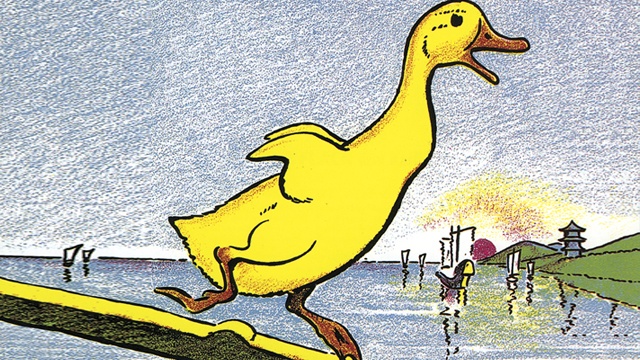 Sometimes, when reading stories to my children that were read to me as a child, I discover how truly dark and twisted children’s literature can be. Or perhaps it’s really how innocent I was as a child, and how my memory has failed me. Two sides of the same coin, in any case.

That’s how I stumbled upon the problem with Ping.

Ping, of course, is the title character in the classic 1933 children’s book The Story About Ping, by Marjorie Flack and Kurt Wiese. I remembered this book fondly as a story about a naughty little yellow duck who doesn’t want to get spanked. The other week, Fiona was, as she put it, “really into Ping,” so I had occasion to read her The Story About Ping five times in one sitting. When you read a book repeatedly like that, you start to notice things.

Ping is a young Chinese duck who lives with his large duck family on “a boat with two wise eyes on the Yangtze river.” The tension in the story is that, at the end of every day, the boatmaster calls the ducks back to the boat from the riverbank, and the last duck to cross over the gangplank always gets a spank on the back with a stick. Ping really, really does NOT want to get a spank on his back. But one day, when he’s upside down in the river catching a fish, Ping doesn’t hear the boatmaster call. When he resurfaces, it’s clear that he’ll be the last duck across the plank. Rather than suffer a spanking, Ping hides along the riverbank.

It was Fiona who pointed out a major issue with the book’s exposition: “Why does the last duck always get a spanking?” she asked. I explained that this was the boatmaster’s way of getting all the ducks to hurry up. NObody wants to stand around waiting for a bunch of ducks to straggle up a gangplank, right?

But I couldn’t deny the fundamental injustice of the boatmaster’s system. Because, of course, when you have a group of ducks waddling up a narrow gangplank, somebody’s always going to be the last duck. That’s just common sense. And it doesn’t necessarily mean that the last duck is a slacker. Take Ping, for instance: he wasn’t doing anything wrong, he was just unlucky enough to miss the boatmaster’s first call. I’m sure he would’ve busted his tail once he realized that it was time to go home, if he wasn’t so afraid of that spanking.

I started to wonder if maybe Ping was really a fable about capitalism, or unions — something like that. I don’t know; there’s only one economist in this family, and it ain’t me, babe.

In any event, once Ping runs away, the story unfolds in a familiar “journey-and-return” sequence. Ping spends a lonely night on the riverbank, and then travels down the river to find his family. Along the way, he has some sobering experiences: Ping sees a fisherman who uses captive birds to fish by fastening metal rings around their necks so that they’re dependent on the small pieces of fish he rewards them with, and then Ping is captured by a boat family who would’ve cooked him for dinner, if not for the mercy of their young son. At the end of this adventurous day, Ping hears the boatmaster’s call and sees the boat with two wise eyes — his home! Although he’s clearly going to be the last across the plank again, this time Ping presses on and submits to the spanking, before snuggling up with his family.

The moral of the story, as I always understood it: there are rules to being part of a family, and sometimes you have to accept discipline in order to live in love and safety.

Except that by about the third reading, I started to wonder: Just how safe WAS Ping’s life with his family? What was REALLY going on in that boat with two wise eyes? I can’t be sure, of course, but somehow I doubt that the boatmaster was raising all those ducks as pets, or simply for their eggs. I married into a Chinese-American family, and I know what happens to ducks. My guess is that Ping and his whole family were going to be Peking-ed before too long.

I sat for a while, letting this bother me. What gives, Kurt and Marjorie? You put Ping through a brush with death and force him to submit to unjust punishment, only to have him end up hanging, roasted, in the window of some restaurant?!?

But then, I realized that it was possible to consider another moral for this story, one that made a lot more sense to me.

We all know that life is unjust: there will always be a last duck over the gangplank who gets unfairly spanked. We also know that we’re all headed for death, eventually. In the meantime? You might as well snuggle up with the ones you love. Go home.

10 thoughts on “The Problem With Ping”