From what we’ve already seen of Middlebury and our new house, we hope and expect that we’ll spend a good long time there.  And that may well be the biggest adjustment. With relatively few breaks, Erick and I have spent most of our adult lives moving, following jobs or graduate degrees. In the past 15 years of my life, I’ve moved 7 times — that’s roughly every 2 years. And I’ve gotten to be pretty good at moving; saying goodbye and pulling up the stakes. So the thought of staying, of committing to a house and a town, is an unknown challenge.

I drove the girls to the library this morning. Usually, trips in our minivan are not times of great conversation. We keep a wide variety of CDs in the van, ranging from “The Disney Princess Collection” to “The Barbie Princess Collection.” As we pull out of the garage, the girls bark, “Turn it up!” and “Louder!” from the comfort of their carseats. Once the volume is up as high as I will allow (the point past which we’ll sound like cruising princess gang-bangers), they zone out. (As do I, but whether I should be allowed to operate a motor vehicle is a subject for another day).

Anyway, this morning, as we were driving through some cornfields, Campbell piped up: “This is the same way we drove to church yesterday.”

“Yeah,” added Fiona, “we always drive this way. We always see the same things. It’s so boring. Can’t we drive another way?”

Have I mentioned that we live in a small town? Or rather, we live just outside a small town. In order to do most anything, we need to drive into town, and there are only two possible routes for doing so; one route spits us out at the south end of Main Street, the other drops us at the north end. So if our girls feel like we’re always driving the same way, it’s because we are.

I explained all of this to Fiona, and offered that, as a special treat, we could drive home the other way!

But then, sensing a teachable moment, I started in on one of my zen motherhood speeches: “Even though we always drive the same way, what you see isn’t always the same. It changes with the seasons and the time of day. When you see something over and over again, sometimes you just have to look a little deeper and you’ll notice things you haven’t seen before.” Then I pointed out little details in the scenery, like the rusty old tractor by the barn, the flags flapping in the breeze.

Fiona audibly rolled her eyes. “I know, Mommy. I’ve noticed that all before.”

Oh my, I thought, it’s going to be a long life.

If you’ve been following this blog from the beginning, you will recall that on the eve of our relocation to Middlebury I expressed some apprehension about the potential permanence of this move (the quote reprinted at the beginning of this post). Here’s the situation: whether we stay here depends largely on whether Erick gets tenure at the college, which is a 7-year process. So, we will be in Middlebury a minimum of 7 years. Seven years is the longest I’ve lived in any one place in my adult life.

If Erick does get tenure, we’re here for the long haul. I’m not really sure what “the long haul” is, but it means that there would be no forseeable endpoint. Erick and are I finally done with school, we will never need a bigger house, and as long as Erick is happy with his job, there will be no reason for us to leave Vermont. According to the 2007 U. S. Census, the average person in the United States can expect to move 11.7 times in their lifetime. This is the 11th time I’ve moved in my life, so if averages apply to me, my moving days are winding down.

What I’m saying is that — as children will do — Fiona was actually expressing some of my own concerns: that I’ll get bored with being in the same place, seeing the same things and people over and over again.

Maybe. But even though Fiona blew me off, I stand by what I told her: that living in the same place, seeing the same things, being settled, is actually a wonderful opportunity to look deeper.

I didn’t always feel this way. In fact, until recently I embraced travel, adventure, big cities, and frequent moves. Which is probably the way it should be when you’re young.

But unless you are fabulously wealthy, with an entire staff at your disposal, travel and moving become increasingly miserable the more children you have. One thing I used to like about moving was that it forced me to “travel lightly,” to weed out anything that wasn’t necessary. But it’s very hard to “travel lightly” with three young children. In fact, moving is now on the list of things I least want to do, just above cleaning up mousetraps. Yes, I know that travel is fun and horizon-expanding for children; up until we had our second child, I swore that children would never slow down our ability to travel. “They’ll just have to adjust to our plans,” I may have actually said (a number of times). And God rolled on the floor laughing. Because honestly, you should see the logistics involved in just driving down the street. Even living in a city with more things to do is no longer as attractive to me; I’m already exhausted by our limited options here.

Looking back, I think that most of my previous travels and moves were, at root, an excuse to stay busy.  Fiona is very into the idea of opposites right now, so all day long she asks me things like, “Mommy, what’s the opposite of eating?” If she asked me, “What’s the opposite of looking deeply?” I would answer, “Staying busy.” Because when you’re staying busy, you don’t have to look around or — God forbid — look inside yourself. You don’t have to notice things. Your priority is to keep moving.

Here’s what living in Vermont for the past year has forced me to do: slow down, look deeply, and notice things. There are so few distractions here, it’s so much harder to stay “busy,” and we’re feeling so settled. Now I have time to notice things like the way the woods change with the seasons, I have time to look deeply into myself and think about who I am and what I believe, I have time to sit down and read and write. We’re also starting to form friendships, which need time to take root. I’m looking forward to forming friendships that we won’t have to uproot in a few years (always the hardest part of moving).

So no, I can’t see myself getting bored anytime soon. I’m not so sure about the girls, who already have plans to become singers in New York City when they grow up. But then again, on our recent vacation to Maine, Fiona sat on a rock by the ocean with her grandparents and drew this picture of mountains, a sunset, and our minivan on a road: 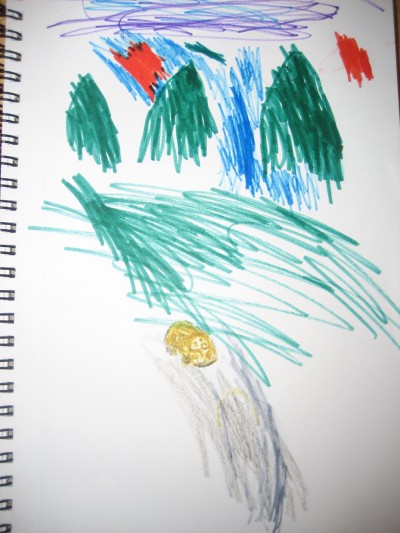 If you scroll up in this post, you’ll see that it looks uncannily like our usual, boring drive. When I asked Fiona what she was thinking of when she drew it, she said, “I was thinking of home.”