This summer has included some wonderful visits with family. Nana and Boom came twice in May to help out when Erick was traveling. In early June, we had two straight weeks of California family staying with us: Erick’s parents, his brother, sister-in-law, and our 2-year-old nephew. And now we’re preparing for a week in Maine with Nana, Boom, and my aunt and cousins on Nana’s side of the family. It’s been a summer filled with laughter, chaos, and hugs.

All of this time with family got me to thinking that the hard thing about families is also the best thing about families: family teaches you to make peace with different styles of being. Or rather, family hopefully teaches you to make peace, because if you don’t make peace with the different styles within your own family, you’ll either go nuts or have some mighty strained relationships  — or both.

Let me be up front: I love my family, on both sides, very very much. And really, we’re a remarkably functional bunch. But like any family, our family is composed of different family members, and each of those members is a unique person with their own way of doing things. Just because you’re family doesn’t mean that you like the same music, or use the same kind of sponge to wash your dishes, or want the same things from life.

It used to make me ANGRY when people did things differently than I did. Really: if somebody made a decision that I wouldn’t have made, I would actually feel outraged. Inside, of course; nice girls don’t get outraged in public. But inside I’d be seething. That was the WRONG thing to do, my mind would fume, and SOON they’ll realize it and be SORRY!

Back then, I probably would have told you that I had such a visceral reaction because I loved these people and wanted to save them from their poor life choices. But now, I see that wasn’t it at all; my anger came from a place of deep internal insecurity, not from a place of love and concern. I was angry when people lived life differently than I did, because when people made different choices, it called my own choices into question and made me doubt myself. I would feel afraid that maybe, just maybe, I was wrong. Anger was my defensive response to fear, not love. Because really, what I was secretly hoping was that these people would come to regret their behavior; that they’d gnash their teeth and rend their clothes over their poor choices, and I’d be validated in the end.

These behaviors that infuriated me ran the gamut from how other people spent their money, to how they raised their children, to what restaurant they wanted to eat in. And this didn’t apply only to my family, but to anybody within my orbit. I look back and realize that I spent a lot of time being angry because of other people’s choices.

The thing about family, though, is that you have to — or at least, you SHOULD — love them and live with them regardless of whether you agree with them in all things. (This only applies, of course, to behavior that doesn’t directly harm you or them or others). So, the longer I’ve lived with myself and learned to feel confident with my own choices, and the longer I’ve lived with my family and learned that their choices don’t have any bearing on our ability to love one another, the more I’m able to cut people a lot of slack. Family has taught me to let people be who they are; to let them show me love in whatever way works best for them, and to love them back regardless of whether I think it was a good idea for them to buy that house or listen to that music or eat dinner in that restaurant.

Because, in reality, most of life is NOT  like a simple game of “Chutes & Ladders,” with good choices taking you up and bad choices bringing you down. Most of life is like a climbing rope that you have to grasp onto with your hands and feet, and it’s really wiggly, and you can inch yourself either up it OR down it, but whichever way you’re going, it helps to have somebody holding the bottom steady for you.

This is where the patched jeans come in.

Back when Erick and I were newly married, it used to bug me that so many of his clothes had holes in them. Those of you who know Erick, or have just SEEN Erick, have probably noticed that he wears torn and stained clothes with pride. This is a guy who hates to give up on his clothes. He’ll bring me sweaters with gaping holes in the armpits, jeans with torn pockets or worn-through knees, and ask me to mend them…again and again and AGAIN. It’s only when I can convince him that something is un-mendable that he’ll reluctantly pitch it. (Most of the time).

This used to make me kind of angry; it was different from how I did things. “Why don’t you just buy a new one?” I’d ask, “Don’t you CARE how you look?”

Now, my stage of motherhood is hard on the knees. You’re always crawling around on the floor with little people, and before you know it, you’ve worn through the knees of your pants. So it was that I tossed out TWO torn pairs of jeans — both of which I’d had for over five years — right before we moved to Vermont.

Once we arrived in the Green Mountain State, I drove an hour to Burlington in order to buy a new pair of jeans at the Gap. Buying jeans is traumatic for everyone, and I’m no exception. My problem is that I’m short, and it’s almost impossible to find a pair of jeans that I don’t need to hem. Gap used to make ankle-length jeans that did the trick, but somehow even those don’t work for me anymore. I’d driven AN HOUR, though: I was leaving this store with a pair of jeans. I selected the best option, took them home, and hemmed them.

Less than a year later, one of the knees wore through.

Faced with the problem of whether I had to drive another hour for a new pair of jeans — or, even worse, attempt to order jeans online without first trying them on — I decided to put a patch over the hole. I found a cute fabric scrap in my sewing bag and smacked it on the offending knee. Problem solved.

Until the hole somehow grew out from under the patch.

Faced, yet again, with the problem of what to do, I dug into my sewing bag for another cute fabric scrap, created another patch, and sewed that patch on to overlap the first patch and cover the growing hole.

Problem solved, again. (Although I’m trying not to notice that the other knee is now starting to wear alarmingly thin). 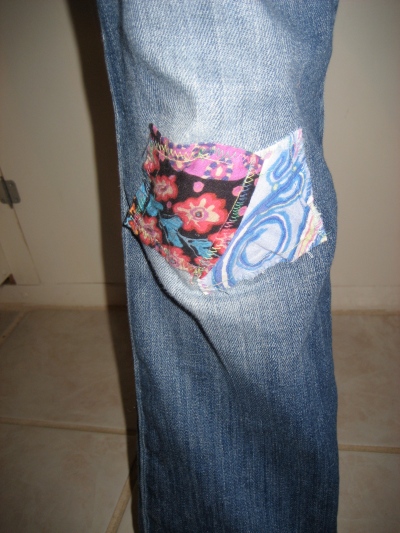 It’s a small but significant example: this is very different from how I used to do things. Once upon a time, my own behavior would have made me angry. Why not just get a new pair of jeans?

It hit me as I was sewing on that second patch: I was not giving up on these jeans, holes and all.

Erick taught me how to do this, just as the rest of my family is teaching me not to give up on people, to be liberal with the patches, and that, instead of watching critically while others play “Chutes & Ladders,” I’d rather be helping to hold the climbing rope steady.

One thought on “Patched Jeans”