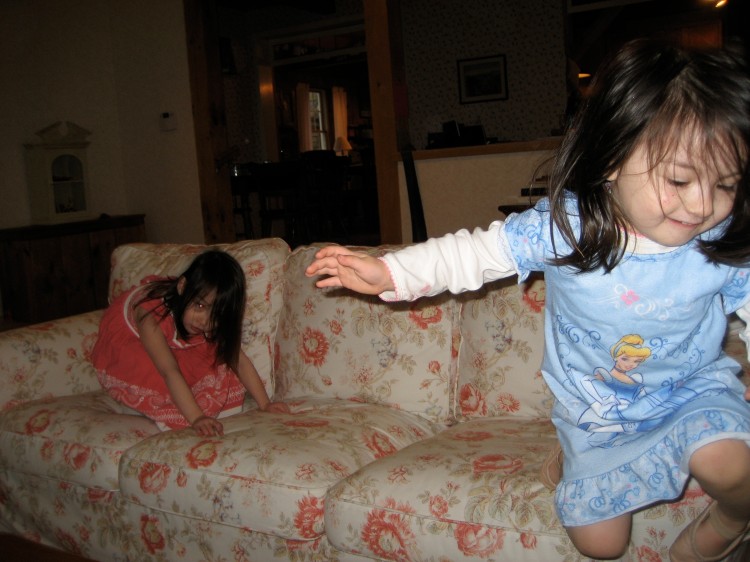 We chose not to know the gender of any of our babies before they were born, because surprises are fun. Then, about three weeks before Fiona’s birth, I had a pregnancy massage. Towards the end, the masseuse asked if I wanted her to “read the baby’s energy” to predict whether it was a boy or girl. (Remember, this was in Berkeley). Sure, what the heck, I thought. Based on the amount of rock ‘n roll that was happening in utero, Erick and I expected (for admittedly stereotypical reasons) that the baby would be a boy. Based on the way I was carrying the baby — all in front — everybody else predicted it would be a boy, too. Unsolicited opinions were flying my way daily; what was the harm in one more?

The masseuse held her hands above my stomach and concentrated very, very hard.

And there you have it. To this day, I can’t think of a better way of describing all three of our daughters than “Girls with boy energy.”

Which leads me to the problem of the jumping.

Like most kids, our daughters like to jump. And, presumably because they have “boy energy,” they like to jump A LOT. Get them near any bouncy house or trampoline, and they’re happy for upwards of an hour. Unfortunately, all that our house has to offer are beds and couches.

I know some moms who have very strict rules about their big-ticket possessions: there are couches in their houses that the kids can’t even sit on, entire rooms that are off-limits, cars that can’t be eaten in, etc. etc. I am not that kind of mom, and even if I wanted to be, it’s too late — it would be like announcing one morning that from now on, we’re all going to be speaking Greek. The bottom line is: I just don’t care that much about stuff. It’s only stuff, subject to entropy like everything else. I don’t want our kids to care too much about stuff, either, and I want them to feel cozy and comfortable in their own home. But my bottom line is actually a fine line to walk: even if you don’t care much about stuff, there’s still a basic level of care or maintenance required for your stuff — otherwise it gets trashed quickly and you end up having to buy more stuff.

Getting our girls to understand that fine line has been a challenge.

In all honesty, it’s couches since we moved to Vermont, which still seems crazy to me. When Erick and I got married, his boss gave us the brown suede couch that had been in Erick’s office. Or, not so much “gave” as “begged us to take it,” since the thing was covered with drool stains from all the naps Erick took on it. And that was our couch, in our New York City apartment and all three of our Berkeley homes. We’ve all recuperated on it when we were sick, I napped on it when I was pregnant and exhausted, and Erick and I both took turns sleeping on it while holding newborn Fiona when she was fussy and couldn’t settle down. It’s been a great couch for almost a decade. And, when we lived in Berkeley, in a 900-square-foot bungalow with no yard, I wasn’t too strict about not jumping on it.

Then we moved to Vermont, where, in addition to a living room, we also have a sun room — a whole other family space that needed furniture. Our old couch ended up in the living room, and I ordered a slip-covered sofa and loveseat from Ikea for the sun room. I used the move to attempt to hit “reset” on our jumping policy: their beds were still okay, but there was to be no jumping on the couches in our new home. After all, we now had plenty of space to run, jump, and play.

It hasn’t worked. Every day I have to tell our girls to stop jumping on one of the couches. They’re getting older and smarter, so they’re starting to use semantics to try and get around the rules: “I wasn’t jumping, Mommy, I was diving/dancing/walking/practicing my cartwheels.” It reminds me of when we had a cat (pre-kids) who would always jump up on the dining room table. We tried everything to make her stop, and finally resorted to getting a “Scat Mat” — a plastic mat that delivers a little electric shock to the paws. Needless to say, she didn’t like the Scat Mat at all, but did it stop her from jumping on the table? No, it did not; she just jumped on the table and carefully walked around the mat.

There is a point, of sorts, to this post, and I’m coming to it now. Probably due to a combination of years of Erick’s naps, scratching by our former cat, jumping by our daughters, and neglect by me, our good old living room couch started to die earlier this year. It started as a teeny-tiny hole, which became a bigger hole, which suddenly became three large, gaping holes spilling white fuzz. Even Erick admitted that it was time for a new couch.

Given the amount of wear-and-tear that our furniture takes in a day, it didn’t make sense to get anything too fine to replace our old couch. So, based on a quick calculation of what would be cheap but durable, look nice but withstand three kids, and simplest for me (a combination of easy to find, quality assured, and delivered to my door), we settled on a basic light brown slip-covered couch from Pottery Barn. It arrived last month, and it looks great.

The ridiculous thing is that we now have three couches in our house — four if you count the loveseat. (Which is probably what I deserve after years of trying to keep life simple and downsized, and for probably judging people who live in big houses and own a lot of stuff just a little too harshly). This plethora of couches might just be the solution to our jumping problem, however. (Aside: Does anybody else out there have trouble using the word “plethora” without hearing El Guapo from The Three Amigos: “What ees a plethora?” Anybody?!? Besides my dad, I mean?)

So, here’s the plan: the old couch, the one with the holes in it, will be moved up to the rec room the next time we have family or friends visiting (family or friends who haven’t already broken multiple bones helping us with house projects, that is), where it will become “The Jumping Couch.”  All other couches in the house, especially the new couch, are “No Jumping Allowed” couches. This has been clearly explained to the girls, who seem to understand. Fiona even proclaimed that the new couch was “too hard for jumping — you’d break your head on it!”

I hope this works, or else I’m going to start researching child-sized Scat Mats.

3 thoughts on “The Jumping Couch”