I’m amazed that it took this long, but our two oldest girls have finally made the connection between parents and stuff. Expressed as an equation, it would look a little something like this:

Erick + me = can buy them stuff

Thankfully, we don’t go shopping with the girls very often. That’s not because we’re virtuous anti-materialists, it’s because we live in small town Vermont: there just aren’t that many stores to shop in. If you’ve been reading this blog for a while, you already know that we have to drive at least an hour to reach the nearest big box stores. (And even dollar stores are causing a brouhaha lately; check out this article, flagged by astute reader Melissa, which includes excellent use of the word “Vermontiness.”) From a kid’s perspective, the offerings in our town are pretty sparse: there’s a great local bookstore, and a fantastic children’s resale clothing store, but that’s about it. The remaining stores are geared more towards the visiting parents of the college students: lots of women’s clothes and charming home furnishings. There isn’t even a toy store; a few stores sell children’s toys along with their other offerings, but diffusing the wares also diffuses our girls’ interest.

Nevertheless, we are being lobbied heavily for stuff. And perhaps because our girls’ imaginations aren’t limited by what they see in the stores, we’re mostly being lobbied for Big Ticket Stuff. Like a hot tub. A trampoline. Bunk beds. An aquarium of fish. A cat. Chickens. I’m sure it’s only a matter of time until horses enter the conversation.

For a while, there were repeated requests for a dog, but that’s stopped almost completely. And for that, we can thank Brinkley.

We have wonderful neighbors, and among the best are our next-door neighbors. (He’s the doctor who walked through the woods to our house after dark when my dad fell in our yard and broke multiple bones, and who correctly diagnosed my dad’s condition without the aid of any medical technology). This past December, they got a golden retriever puppy named Brinkley. Mrs. Doctor brought Brinkley over when he was a few weeks old to introduce him to the girls. He was absolutely adorable, still tiny enough to be carried like a baby. The girls cooed and petted him, and that was that. It was winter; everyone takes to their homes. We didn’t see our neighbors, or Brinkley, for several months after that.

Flash forward to April. One sunny spring Saturday, we were all out in the yard when suddenly an enormous golden dog came tearing through the woods into our yard. He bounded right up to the girls, ready to play. They got it right away; Fiona picked up a stick and threw it, and because he’s a retriever, he retrieved. “Is that Brinkley?” I asked. I’d almost completely forgotten about the tiny puppy next door. This 100-pound bundle of energy bore little resemblance to the Brinkley we’d first met, but it was him all right. And, for our girls, it was love at second sight. 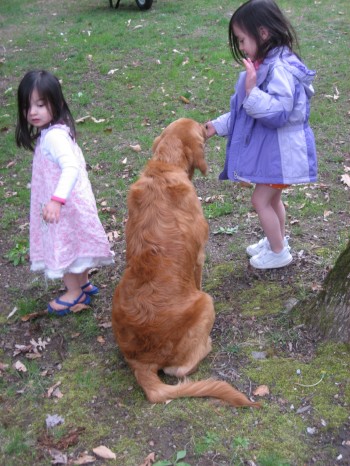 All afternoon, Fiona and Campbell romped around the yard with Brinkley. They kept each other completely amused playing chase, catch, and boss-the-dog-around. Even Georgia, who is about five times smaller than Brinkley, was charmed. Brinkley would run up to her and lick her all over, and she’d scream with delight and wobble after him.

And so it came to pass that we adopted our neighbor’s dog. Mrs. Doctor even brought us over our own Mason jar full of dog treats, so that the girls can reward Brinkley for following commands. This week, they’re installing an electric fence to keep Brinkley contained, but they’re extending it to include our yard. (This is partly just nice, and partly practical, since Mrs. Doctor has told me that whenever Brinkley hears our girls shrieking in the yard, he barks his “protective bark” and rushes over). 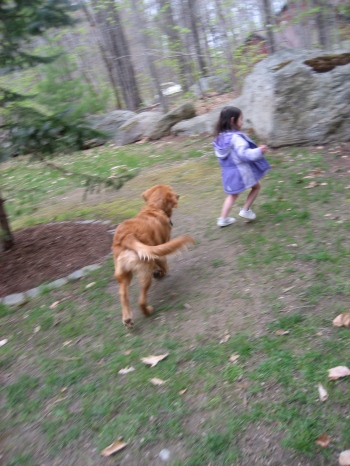 It’s an ideal situation, really. An early taste of grandparent-hood: all of the fun, none of the responsibility. These days, whenever we go outside to play, the first thing the girls do is to climb up the rocks that border our neighbor’s yard and holler, “BRINKLEY! BRIIIIIINKLEEEEEY!” Chances are that Brinkley will come bounding over, and everyone will have a good frolic. In fact, the only problems occur when playing isn’t possible: sometimes Brinkley will come up to the screen door in our kitchen during meals, and sit there staring forlornly at the girls, wanting only to play. And the biggest temper-tantrum Georgia’s ever had happened because Brinkley was running around our yard looking for a playmate, and I wouldn’t let her run outside alone to join him. “BINK-EEEE!” she screamed, pounding the window, “BINK-EEEEE!!!!!” (This child still doesn’t say “Mama” or “Daddy,” but she says “Brinkley”).

So, just a suggestion to anyone else whose children are petitioning for a canine companion: try convincing your neighbor to get a dog. It’s working for us; whenever the girls start mentioning pets, I just say, “But what about Brinkley?” and the whining ceases. So far.

4 thoughts on “Brinkley and Us”

© FAITH GONG and THE PICKLE PATCH, 2011-2020. Unauthorized use and/or duplication of this material without express and written permission from the author is strictly prohibited. Excerpts and links may be used, provided that full and clear credit is given to FAITH GONG and THE PICKLE PATCH with appropriate and specific direction to the original content.
Loading Comments...
Comment
×
%d bloggers like this: