If you know Campbell, then you know the Sweeties.

The Sweeties are two little blankie animals (I believe they’re often called “lovies”) that Campbell carries with her EVERYWHERE. Looking through our photos, I was actually shocked at how seldom the Sweeties appear — I must do a better job editing than I thought — because Campbell seldom allows them to be more than arms-reach away. The two Sweeties are differentiated as “Pink Sweetie” and “White Sweetie” based on their original colors, although by now they’re both just a dull grey.

And here she is with White Sweetie:

The Sweeties were originally given to Fiona when she was born. But her level of attachment never even approached Campbell’s; shortly after Campbell’s birth, Fiona decided it was time to pass along the Sweeties to her new baby sister, so she put them in Campbell’s crib. The rest, as they say, is history. (This is actually interesting, because if you asked the people who know our daughters which one would be most likely to form a strong attachment to a security object, they probably wouldn’t guess Campbell. Campbell is louder, more secure in who she is, and throws her body around a little more than Fiona, so people tend to assume she’s the tough one. In fact, it’s not that simple. Campbell is afraid of random things like automatic hand dryers, she’s the one who wakes up with nightmares… and the Sweeties are her equivalent of Samson’s hair. Which just goes to show that people are complicated).

What Campbell likes to do with the Sweeties is: bury her face in the silky material on their undersides. Or, more accurately, she inhales them. Because they come with us everywhere, I see the Sweeties as a convenient form of immunotherapy — and Campbell is the healthiest of our girls. (Check it out: science via NPR validates my dirty kids!) Erick, on the other hand, is always looking for opportunities to steal the Sweeties and throw them in the wash. So he’s not Campbell’s favorite parent.

Of course, there are some boundaries imposed on Campbell’s relationship with the Sweeties. She may bring them along in the car, but — assuming our destination is Sweetie-friendly — she’s only allowed to bring ONE Sweetie out of the car with her. The winner in this daily Sophie’s Choice is always: Pink Sweetie. 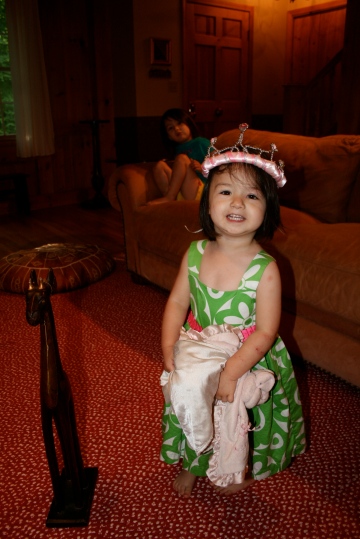 So it was a pretty big deal the day she left Pink Sweetie at home.

Here’s how it happened: I was taking Campbell and Georgia to the weekly playgroup that the Addison County Parent Child Center hosts at our church. In addition to the Sweeties, Campbell had collected a couple of stuffed animals that she also wanted to bring in the van. She had such an armful that, somehow, Pink Sweetie slipped through the cracks. We drove happily all the way into town, parked the van, and as I was unbuckling Campbell from her carseat we both realized that Pink Sweetie was missing!

I can’t think of any fitting metaphor to capture the magnitude of Campbell’s trauma at this realization. Imagine the most dramatic movie scene in which two lovers are being torn apart — something from Titanic, say — and that’ll just about do it. She was completely prostrate, screaming unintelligible words punctuated by “NOOOOO!” I tried reason: You still have White Sweetie, if we go all the way back home we’ll miss playgroup, I need to get Georgia out of the car. Nothing worked. I did one of those quick parental cost-benefit analyses in my head, and then said: “We’re going in. You don’t need Pink Sweetie to have fun. You’re going to be okay.”

And I repeated that over and over while I dragged my screaming child the longest 25 feet of both of our lives towards the door. Do you ever have a moment when you think: “Someone is going to assume I’m abducting my own child and call the police on me?” This was one of those moments.

In the end? She was fine. By the time we made it through the door, she’d settled down. When she saw all the children and toys at playgroup, she hesitated for a minute and then jumped right in as usual. When we returned home, Pink Sweetie was waiting on the Mud Room stairs.

At dinner that night, I told Erick how proud I was of Campbell. Campbell’s version: “I cried. I stopped crying. Happy!”

It was a good moment, and I was hoping she’d hold a little more loosely to Pink Sweetie afterward, figuratively speaking. And so far, she has — literally speaking. The next day we took some visiting friends (Manny, Zoe, and daughter Sofia from Maine — click here to read Zoe’s generous account on her own blog) to the Salisbury Fish Hatchery, which produces trout to stock Vermont water bodies. Pink Sweetie came along, and right at the very end, as Campbell leaned over one of the pools of trout — the one with a “No Hands in Water” sign right above it — she held Pink Sweetie so loosely that Pink Sweetie fell into the water. Guess who had to fish Pink Sweetie out? So between my hands and the germs on Pink Sweetie, if the Vermont trout population dips steeply this year, you’ll know why.

I was wondering whether I have a “Pink Sweetie” in my own life. I think it’s probably coffee.