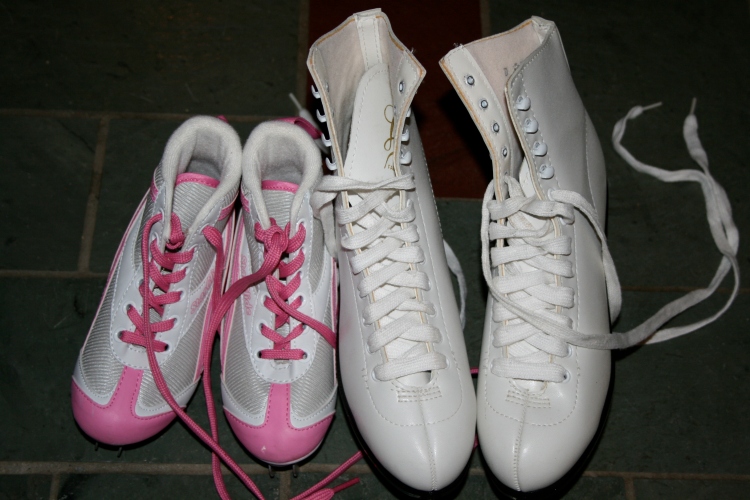 One of the things that Erick and I try to do, with varying degrees of success, is to each have one monthly date with each of our two oldest girls (Georgia’s time will come). During December, this got lost in the Christmas festivities, but now we’re back on track. Fiona and Campbell got ice skates for Christmas, so I decided that for my “mommy dates” with them this month, I’d take each of them skating at the town rink. This past Sunday it was Fiona’s turn.

Most of you may not know this about me, but I really love ice skating. Back when I was in college in the northeast, I even took lessons. And I haven’t skated since then, partly because I married Erick, who has flat feet and isn’t very comfortable in ice skates, and partly because I lived either in New York City or Berkeley, where most ice skating options involved waiting for four hours with a bunch of tourists for some overpriced city skating.

But here I am, back in the northeast in a town with a rink that has open skating hours, and with two daughters who are willing skate dates.

Fiona had never been skating before. I don’t know about other kids, but our girls are still pretty unpredictable in terms of what I’ll call, for lack of a better term, “trooper-ness,” from one situation to the next. One day they’ll voluntarily hike barefoot three miles through the snow; the next, they’ll whine endlessly and demand to be carried the second we leave the house. So before hitting the rink, I gave Fiona a pep talk. It went a little something like this: “Fiona, you’re going to fall on your butt. Probably more than once. When this happens, are you going to cry and ask to go home, or are you going to get up and keep trying?” What can I say? I’m a tough love kind of mom.

So we got to the rink, and it was great. Because we live in a small town with limited recreational options, about half of Fiona’s preschool class was there, including one of her favorite preschool friends, Ruby. Ruby had been skating a few times before, so she was whizzing around in the middle of the rink, holding onto a nifty contraption that they have here for beginning skaters: two milk crates zip-tied together. Here’s the idea: 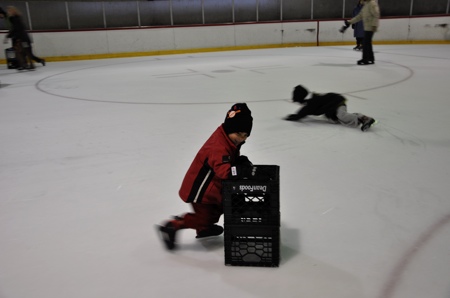 Fiona’s main objective immediately became: get to Ruby. And that day, Fiona’s “trooper-ness” was at a high level. She fell a couple of times, but bounced right back up again. She tried the milk crates, but wasn’t actually a big fan. (I don’t think her visions of ice skating had involved being hunched over a couple of plastic crates). So before too long, she was venturing out on her own, and doing pretty well.

And then it happened: she reached Ruby, turned to me, and said, “I’m okay, Mommy; you can go now.”

Isn’t this the moment we hope for as parents? When Fiona was born, Erick and I laid out this mission statement, which is probably not that unusual and which we often circle back to: our main objective in parenting is to get our kids to leave us. (Seriously, I have very low standards. As long as they’re self-sufficient, relatively happy, and not breaking the law, I will consider my job well done). And, barring the normal periods of attachment, Fiona has not had problems with independence, it’s just that up to this point, it’s always been me pushing her off. Sleep in your own room, stay with a babysitter, go to Sunday School, go to preschool. I really think that this is the first time that Fiona has pushed me away — and I mean that in the best possible way. (Campbell is another matter; she’s been telling us — verbally and non-verbally — to “Go away!” almost since birth). But of course, when Fiona said this to me, my first response wasn’t joy, it was shock.

Anyway, I went. I skated away from my daughter and joined the brisk oval of skaters circling the outside of the rink. And I have to say, it felt amazing. It was a little strange not to be hunched protectively over a child, but didn’t take long to rediscover my balance, my speed, and that feeling of soaring that I’ve always loved about skating. (And thankfully, because of the layout of skating rinks, it was also easy to keep an eye on Fiona and Ruby, who were having a blast in the middle of the rink).

I guess I’d better get used to it.