When you begin your adult life in New York City (as we did) and then move to progressively smaller towns (as we have), it’s funny to see how one’s view of public safety changes, as does one’s concept of what qualifies as news.

To put it another way, how our lives have changed in recent months can be neatly illustrated by our subscription to the Addison County Independent. 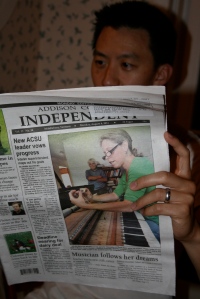 We subscribed to the Independent, our local bi-weekly newspaper, on a tip from another professor’s wife. She recommended it because it includes an extensive community calendar of events in each issue. I must say that, thus far, I’ve mostly been overwhelmed by how many weekly pig roasts/ham suppers/chicken barbeques are being put on by various associations in the vicinity, but we have found some great events. (Like the Bristol “Truck Touch,” when the town next-door parked a schoolbus, police car, fire engine, and ambulance on the town green for a Saturday morning and opened them up to kids. Brilliant!)

But more than the events, it’s the news that’s been eye-opening. In the midst of horrible world events, crazy financial markets, and the end of J-Lo’s marriage, last Monday’s Independent featured front-page stories like “Musician follows her dreams,” and “Deadline nearing for dairy deal.” Then there are the editorials! The same edition included editorials titled “Helpful neighbors make Vt. great,” and — to quote the great Dave Barry, I am NOT making this up, “Postal service does a great job delivering mail.” Not to mention the “Pet of the Week,” who happened to be a miniature donkey named Gepetto.

I kept looking, and found some alarming news on page 6: “Brief Thursday power outage affects 2,400 in Middlebury.” We hadn’t been affected, but it sounded serious, so I kept reading: “Many Middlebury residents and businesses went without power for about three minutes on Thursday around 12:30 PM.” Did you catch that? A three minute power outage (cause still unknown at press time) received two columns of print space!

Which leads me to the topic of public safety. Oddly, as I’ve moved to smaller places, I generally have felt less safe. It makes no sense at all; we were in New York City during 9/11 (while we were – mercifully – not directly affected, it was certainly an anxious time). But when we moved to Berkeley, I never quite got over living on the ground floor without a doorman. And Berkeley was arguably less safe than post-Guiliani NYC; during our time there, Erick’s bike was stolen from our garage, and then the bike he borrowed to replace that bike was stolen. There were gang-related shootings just blocks away. Oh, and then there was the Sunday morning we found a hole in our windshield, the cause of which was revealed when we located the bullet next to Fiona’s carseat. (For a minute I thought it was roving gangs of rival economists putting a hit out on Erick, but the police decided it was someone in our neighborhood firing their gun in the air. Which made me feel MUCH better!).

Despite all of this, I didn’t necessarily feel safer moving to small town Vermont. While we can see our neighbor’s houses through the trees, we’re still further from people than we’ve ever been. And at night here, it is DARK. I mean, darker than I’ve ever seen; there’s not a streetlight within miles of our house. Not only that, but due to sightings by our neighbors, we’ve had to have that talk with our girls. You know, that talk? Yup, the “what to do if a bear shows up in our yard” talk….

But reading the Police Logs in the Independent is starting to make me feel that we might actually be safe here. From the Vergennes (a nearby town) Police Log (again, I am not making this up):
“On Aug. 1 gave directions to a motorist on Main Street; On Aug. 2 were asked to find a woman, but learned she had moved to New Haven…On Aug. 2 found a camper door open at Denecker Chevrolet and told a business representative.”

You get the idea. (I love the image of the Vergennes police force checking doors at local car dealerships).

Now, Middlebury is a larger town than Vergennes, so the Middlebury Police Log is a little more down & dirty. In the past week, police:

“Received a report of some boys throwing food onto cars in the Fire & Ice parking lot. Police said the boys ultimately cleaned up the debris and apologized to restaurant officials;

Received a report that someone had stolen 40 compact discs — all containing Christian music — from a vehicle parked off North Pleasant Street;

Told a visiting cyclist that he could not sleep overnight on the town green. Police said the man had set up a hammock between two trees on the green.”

So if you visit us here in M-town, don’t say we didn’t warn you. Keep an eye out for flying food, lock up your Amy Grant cds, and leave your hammock at home. But bring your bear spray.